A Failed Attempt to Block a Right-Of-Way 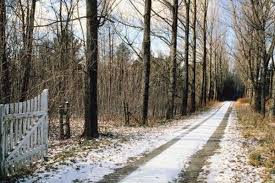 My firm’s practice includes the representation of timberland owners. In 2005 I received an attorney referral of a timberland owner; the referring attorney did not feel he could provide the services that a litigated matter required. I met with the client and learned that he originally owned a 43-acre parcel of land with a house and garage near the road. Since he had no use for a second home (he had already moved out), he split the parcel into a 5-acre front piece containing the home and garage and a rear 38 acre- piece. The latter was accessible only by a retained right-of-way over the existing driveway, which ran between the house and garage. Due to a typographical error in the legal description for the right-of-way (“southwest” versus “northwest”), problems arose after my client sold the frontage and retained the rear parcel.

Approximately 18 years after selling the frontage, our client’s retained rear parcel was ready for a timber harvest. At this time the price of black cherry timber was near an all time high. My client’s woodlot contained black cherry as its predominate species and it was highly sought after by timber buyers. My client hired a forester to mark the timber and mail out prospectuses to the usual buyers. Upon visiting the property my client noted that there were two large vehicles blocking his right-of-way, and he asked the owner of the front parcel to remove what looked to be a large truck and a race car van. Despite the right-of-way being clearly set forth in the deed, and despite the fact that our client had used the right-of-way without objection for the previous 18 years, the owner refused, even after my client had his first attorney write a letter citing the deed and demanding removal of the vehicles. My client was forced to bring a lawsuit after the timber sale was cancelled due to there being no access to his parcel and no way to get his timber out.
When my firm was retained the lawsuit had already been started. We reviewed the complaint and realized that additional causes of action had to be added in order to fully protect our client and compensate him for all the injuries he had suffered by the defendant’s outrageous behavior in blocking the right-of-way. The defendant vigorously opposed our attempt to amend the complaint, as the amendment would greatly increase the defendant’s exposure. The judge heard our motion, however, and permitted the amended complaint to be filed. The defendant appealed, but lost approximately one year later when the appellate court unanimously upheld the trial judge’s decision.

Subsequently, discovery was completed and a jury trial was held in Wyoming County, New York. The defendant’s position at trial was that there was no right-of-way at all; and if there was, it started at the road and went nowhere, due to the typo in the deed which directed the right-of-way to the southwest rather than the northwest. The defendant also asserted that my client had waited too long after first learning that the right-of-way was blocked.

Prior to turning the case over to the jury, the trial judge upheld the validity of my client’s right-of-way. The jury then determined the location of the right-of-way as being over the driveway, exactly as stated in the deed. The jury also saw through the defendant’s flimsy defenses and awarded my client $110,000 in money damages as compensation for the cancelled timber sale. With interest, the final judgment became $160,000. The defendant filed various post-trial motions, including a request to vacate the jury verdict as being against the weight of the evidence. These motions were denied. The defendant also refused to comply with the verdict, as a result of which our client was forced to have the defendant held in contempt. The defendant also appealed the verdict, but lost the appeal. The decision is reported at Meyer v. Stout, 79 A.D.3d 1666, 914 N.Y.S.2d 834 (4th Dept. 2010).

An additional factor here was that my client had granted the defendant a right of first refusal to acquire my client’s timber parcel if, and when, he sold it. The jury was presented with the prospect that the defendant had all the incentive in the world to block the right-of-way and cause my client’s timber to become, if not worthless, then of very little value, whereupon my client would be forced to sell his property to the defendant for almost nothing, since its lack of access made it landlocked. The jury may have suspected the defendant’s motive in awarding my client damages for the cancelled timber sale. Also, the price of black cherry timber had dropped 50% from the time of the proposed timber sale to the date of trial, and our presentation of expert testimony on this point may have helped the jury justify its damage award. While this was bad luck for the defendant, he certainly got his just desserts. My client was rewarded for his persistence: he was compensated for the devaluation of his timber, including interest from the date of the loss; he recovered a portion of his attorney’s fees [a rare event] and still has the timber – though now worth 50% less – and a way to remove it from his land.

The lesson of this case is twofold. One, make sure that your timber parcel has valid access, and make sure that the access is described in the deed with a metes and bounds description, rather than merely “from the road back to the property.” Two, if your access becomes blocked, take action immediately so that you are not barred from recovery by the statute of limitations. This client knew enough to assert his rights within a reasonable period of time, and to remain patient – yet persistent – as the defendant dragged out the case and delayed the trial for as long as possible. Timberland owners must remain vigilant in protecting their timber, and this includes protecting access to it. Otherwise, the world is full of people always seeking to improve their economic position at your expense. Not every blocked access story ends this happily.

The author was assisted in writing this article by A. Nicholas Falkides, Esq. from his law office who acted as trial counsel.